Whipping The Supply Chain Back Into Shape

What a long, strange trip it’s been. Over the past year and a half, manufacturers and wholesale distributors like you have stared down a global pandemic, economic uncertainty, wacky weather, and a hobbled container ship blocking the Suez Canal.

I don’t think supply chains have ever gotten quite this much attention! says Yoav Zingher, founder and CEO of Launchpad (www.launchpad.build). In 2020 everyone found out what manufacturing insiders already know—our ability to flexibly make things, innovate, and adapt has been severely reduced in a competitive drive to lower prices. In a static world, lower prices are the easiest way to compete. But in a world of rapid change, either because of negative shocks such as a pandemic, or positive shocks such as technology innovation, the best way to compete is to be one step ahead of everyone else, by being flexible and adaptive.

As the pandemic was declared, manufacturers—anticipating a recession—followed the playbook of previous economic slowdowns. They shut down production lines and sold off excess inventory. The problem was…consumers didn’t get the memo. 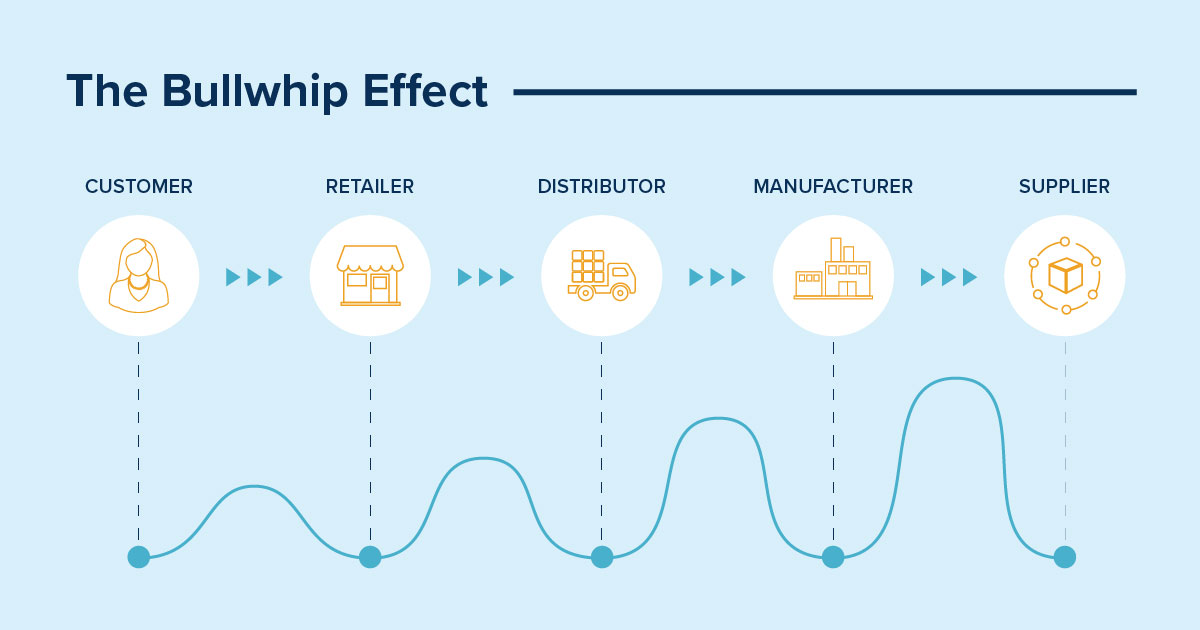 What is the bullwhip effect?

The bullwhip effect in supply chain management is a phenomenon that creates false supply and demand fluctuations that reverberate up the chain. It disrupts not only retailers but also distributors, manufacturers, and suppliers.

According to federal data, consumer spending on long-lasting goods in the U.S. rose 6.4% last year but domestic production of those goods fell 8.4%, leading to shortages and higher prices.

The result was a bullwhip effect. No, it’s not some crazy made-up COVID term. It’s something many of us learn in business school and forget it even exists—except during a recession. The bullwhip effect in supply chain management is a phenomenon that creates false supply and demand fluctuations that reverberate up the chain. It disrupts not only retailers but also distributors, manufacturers, and suppliers.

In a typical down economic cycle, companies reduce staff, sell off inventories, and manage reserves as sales decline. Once sales or demand appears to be improving, everyone over-orders to try to catch up with the increased demand. This always causes volatility and price changes within the supply chain for manufacturers, distributors, and suppliers. This year, however, the bullwhip effect is behaving more like the virus spreading throughout the world. Abnormal. Infected. And like nothing we’ve ever seen before.

Examples span multiple industries. For instance, demand for luxury goods typically drops during a recession. So, suppliers prepared for a normal recession and reduced inventories. The problem was…demand did not drop. Sales of recreational boats in the U.S. during 2020 were the highest in 13 years, according to the National Marine Manufacturers Association. Orders for durable goods, such as cars, appliances, and furniture were also up.

With sparse inventories and growing demand; retailers, manufacturers, and distributers were forced to over-order—and more than ever. This created ripples up and down the entire supply chain all the way down to the end customer. It will take months and even years to catch up.

Manufacturers and wholesale distributors have similar problems, primarily with supply chain and delivery. No matter what you did or do, you can’t keep up! Manufacturers are stuck with either too much or not enough inventory and have to figure out new ways to be agile. For example, how can you increase prices on certain products, while incentivizing companies to purchase the excess inventory that is not selling? Don’t forget the global shipping crisis; we may not see a resolution to that for an extended period.

With uncertainty now certain, you need to be agile and flexible with plans and market strategies. One thing we do know is that there will be another pandemic, more geopolitical crises, and climate disasters. Shortages may become a fixture in the supply chain.

Like I said in my partnership post last year at the beginning of the pandemic, we are all in this together and manufacturing and distribution have to work side-by-side